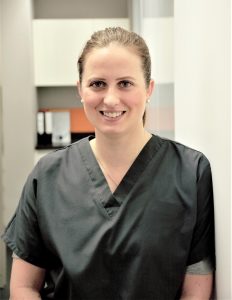 "For young dentists that are looking to make connections and seek mentorship and/or support as they begin their career, attending ADA branch meetings and meeting colleagues who practice in the local area is a great start."​

Dr Mikaela Chinotti is a Sydney based general dentist. She graduated as part of the inaugural cohort of dentists from James Cook University (JCU) in 2013, having grown up in North Queensland. Mikaela returned to JCU to complete a Master’s in Public Health majoring in health promotion in 2018 before moving to Sydney, taking up the role of Oral Health Promoter at the Australian Dental Association as well as continuing to practice general dentistry.
As the ADA Oral Health Promoter, Mikaela works within advocacy and health promotion. One of her main roles is the organising of the ADA’s annual oral health campaign, Dental Health Week, but jobs range from creating the ADA’s new oral health education podcast for the Australian public and facilitating the creation of the ADA Consensus Statement on Ankyloglossia and Oral Frena to creating resources for ADA members to easily download-and-go when looking to partake in oral health promotion activities within their local community.
Mikaela is also a founding member of the Colgate Advocates for Oral Health: Editorial Community where she has written articles on discussing nutrition in the dental practice, the importance of oral health literacy as well as decision making and knowing your limits. Her articles can be found here.

Once you graduated, how did you go on about seeking a mentor? Do you wish you did anything differently after graduation?

I grew up in Ingham, North Queensland and being a small town, decided to undertake my mandatory year 10 school-based work experience at one of the local dental clinics which had recently been purchased by two recent graduate dentists. I continued to return of my own accord in years 11 and 12 and then throughout my dental degree. When graduating in 2013, I was offered a job at the dental practice which I accepted, not because I had the strong desire to return to my hometown because location wise, I was interested in living and practicing in the Atherton Tablelands; it was the mentorship and support that I sought. Unfortunately, I moved on from the job after 1.5 years as another dental practice opened, oversaturating the small population, however it was a great first job and if I were to have my time over, I would take the job again.

You became involved with Colgate and ADA soon after graduating, do you have any tips for new graduates on how they can get involved with such associations?

I have been an ADA member since university and have always valued the support and provision of information that associations can provide; however, I did not get involved until making the move from Townsville to Sydney in 2018 when I began as staff at the Australian Dental Association. For young dentists that are looking to make connections and seek mentorship and/or support as they begin their career, attending ADA branch meetings and meeting colleagues who practice in the local area is a great start.
Additionally, the ADA has a volunteer committee called the Recent Dental Graduates Committee where members can have input and influence in the new graduate space and in supporting their colleagues who are no doubt experiencing similar situations.

As an oral health promoter, do you have any recommendations for dentists on how they can efficiently convey the value of regular hygiene appointments to their patients who only visit in case of emergencies?

This is not always easy and for individuals who only see oral health as the absence of pain, this can require significant changes to behaviour and mindset, but it is possible to turn a problem-based attender to a regular patient. Conveying the value of regular dental care and hygiene appointments is associated with health literacy, which is an individuals’ ability to access, understand and use health information to make health decisions as well as the ability to access and navigate the health care system.
During an emergency appointment, while you are waiting for the anaesthetic to take effect, have a squiz around the mouth…does the patient have any other signs of oral disease such as gingivitis, carious lesions or calculus built up? Plant the idea of returning by showing them an intra-oral image or radiograph if the one you potentially took during the emergency shows this. Create concern and motivation to return.